Well, here’s my next installment of “FREE Stuff!” and it is my latest CARtoons illustrations as desktop wallpapers. I only offer two sizes; the most common, and largest, in both 16:9 and 4:3 monitor aspect ratios.

That’s right boys and girls!! You can download a Krass & Bernie CARtoons Magazine cover image for your Facebook profile or fan page. It is possibly the most remembered title image of the Krass and Bernie comic with a few tweaks and modifications. I have colored it… the main difference… and expanded its dimensions to be that of a Facebook cover image. I removed the “Krass and Bernie” title text and put the CARtoons logo instead along with a Facebook logo in the corner. Just click on the thumbnail below to download the image.

END_OF_DOCUMENT_TOKEN_TO_BE_REPLACED

Photoshop Creative magazine, issue 92, was published this month featuring my “Bad Monster” illustration in the Reader’s Gallery on page 8.

They contacted me on August 13th and asked if I would mind them publishing the “Bad Monster” painting. And of course I was like, “How much is it worth to you?”… and they didn’t reply any more…

No, seriously, I was excited! I prepared all the files, sent the copy release, and asked when it would be published and where I could purchase additional copies… and nothing. No Joke. I checked issue 90, waited for issue 91, and then I wrote… they replied and said it would be in the next month’s issue… and there it was. It was difficult to not share the news when I heard and actually wait for the magazine to come out… but I did it! Anyway, it’s cool! 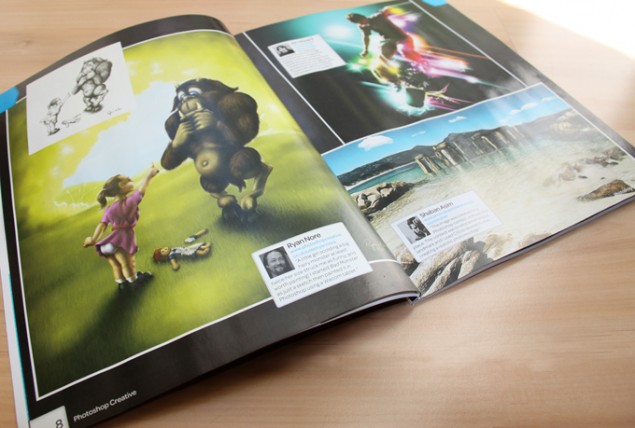 Well, I must say, this has been a rather monumental day for me! Today Artflow Magazine published its first anniversary issue. It not only contained an interview with me about myself and my art but my “World of Art” painting was the cover image!! How spectacular is that!? I certainly already knew that my interview would be in the anniversary issue but looking back I don’t think I gave it a larger value. I definitely am not implying that I did not consider it an honor and a privileged to be having the interview and for it to be published in the magazine. But when Flora emailed me to let me know the magazine had been published , where to see it, and that there was a bit of a surprise… well, it all hit me right in the face! I mean the anniversary issues are marks of achievement for magazines… and my painting was the cover image!! That is just too cool!

Anyway, “stoked” is an understatement. But! Now it is time to focus and keep my head! I definitely don’t want to become one of those artists that have a bit of success with a painting or two and then spend the rest of their time doing variations upon a theme in attempt to achieve the same “high” or mark of success. I have thoughts and things to say that push in another direction than that of “World of Art”.