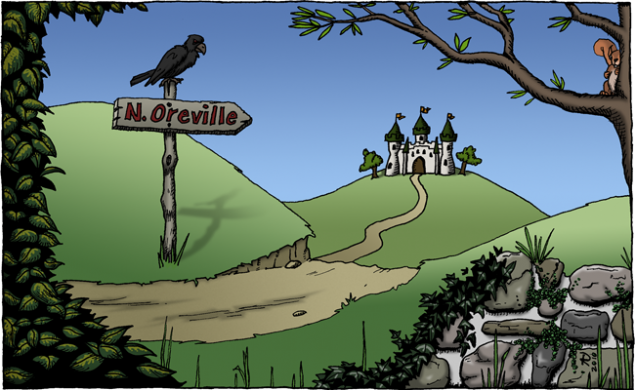 Once upon a time, in a distant land, there was a little kingdom known to a few as North Oreville. There you would hear tale about Salena; the fairest lady ever known.

Some would say she was a princess although she was no daughter of any king to this land, nor any other. Even though she was the most beautiful, smart, caring, and creative person in all the land she was also all alone. Nobody understood her and so she was quite lonely and sad. In those moments of sadness she would take long walks in the Wonderfully Witchery Woods.

Now, Wonderfully Witchery Woods was full of magical places, hence the name, but during one of Salena’s walks she happened upon an especially magical spot. She felt right at home there and began cultivating the magical garden and making it her own. Of course in doing this she attracted all kinds of forest creatures who found sanctuary from the Wickedly Wild Woods in her gorgeous garden spot. 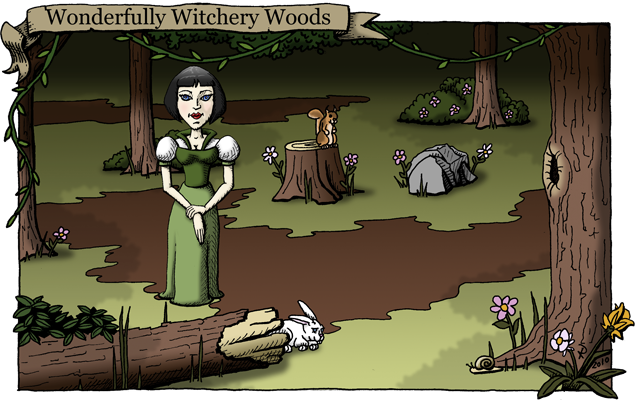 As time went on, Salena spent longer and longer periods in the magical garden. She got to know some of the creatures much better and didn’t feel so alone any longer. She felt accepted and understood by most of the creatures in the garden. And despite all the huge differences between them they grew close and considered each other family. While, for the most part, they were all pretty close to one another there were a particular few that stood out more than the others. And one in particular that stood out the most and was held dearest in her heart. And that would be Brian the brown bear. 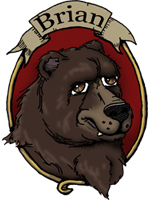 Brian the brown bear wasn’t the typical brown bear. He wasn’t concerned with the things most other brown bears were concerned. Being as such, Brian felt outcast from the other bears which is what initially drew him to Salena and her garden. It seemed to him that he had a higher chance of being accepted for who he was there rather than with his own kind. And all of this is probably what drew Salena more to him out of all the others in the garden.

Salena and Brian became closer and closer but they both had realized that all they could ever be is friends. This made them both sad as they had been searching their entire lives for someone just like each other.

One day as Salena was going home from a visit to the garden she was not paying attention to where she was going and looked up to discover she was a bit lost. She must have taken a wrong turn here or there along the way but if it wouldn’t have been for that she would have never met Herbert the homely hermit.

While Salena found his sudden appearance to be a bit startling his crooked little smile quickly brought her at ease with his presence. He noticed how he startled her and apologized sincerely, then added that he had noticed her a little ways back. He apologized again if he was being too forward but said he couldn’t help but notice how she seemed to be a bit down. He offered his help if only to be that of a kind and caring ear to listen to her problems. She thanked him sincerely and explained that she is hesitant only because he might think her insane. He assured her that in all his years he has witnessed many things for which one might judge him the same and that he would not do that to her. 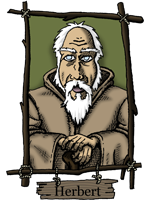 Herbert the homely hermit listened to Salena’s story all the way to that day and sat looking a little puzzled. He told her that it reminded him of a tale about a man that fell in love with his milk cow. And as tale would have it they went deep into the Wonderfully Witchery Woods to a beautiful waterfall where neither river nor creek flowed. There the man and cow openly professed their desire to be with each other and so it was. The cow became a woman and they were then able to marry. Except that if ever one’s feelings changed for the worse the other would turn to stone.

This bit of news gave hope to Salena and she couldn’t wait to tell Brian. So she found her way back to the garden and told him everything. Bright and early the next morning they both started scouring the Wonderfully Witchery Woods in search of the waterfall of which Herbert had told tale. They knew that it wouldn’t be easy to find, if it existed at all, because there wasn’t a creek or river that flowed into it or from it. All they could do is wander through the woods while listening for the sound of running water.

They had been searching for weeks and with each new day they became more and more convinced that they would either not find it or it simply wasn’t real. And then it happened… they found it. It was just like they had imagined it. The water seemed to flow from the top of a large rock and disappear into the ground. It was crawling with life. The most beautiful and lush flowers and ferns growing all around it and hundreds of animals visited the waterfall for water.

There they both stood, on the brink of crying from happiness, and wondering how to proceed. Now was the moment of truth. Were they sure this is what they wanted? And did they both understand that they either live the rest of their lives in love or it would end with one of them turning to stone? Hand in hand they walked to the edge of the fall and began professing their love and desire to be with each other for the rest of their lives. As they were revealing their heart’s desires to the waterfall a humid mist surrounded them and once done, it dissipated unveiling an eager Selena staring wide eyed at an anxious man where Brian was standing. They rushed to each other’s arms, thanked the waterfall sincerely, and kissed each other passionately.

For the most part, life was beautiful for them both. Salena had to teach Brian many things that he just didn’t know about from when he was a bear. Things were much simpler for him then. However, he was learning it all enthusiastically, even though he certainly had difficulties here and there. Don’t think it was any piece of cake for Selena! She knew there would be some problems but it had never crossed her mind that there were going to be so many.

And then it happened, one day when Salena and Brian were having an argument, Salena said she hated him. Right in front of her eyes, Brian turned to stone in the middle of the kitchen. At first she was a bit happy about it but that mislead feeling quickly morphed into panic. She ran from the house and into the woods crying. When she finally stopped running she found herself looking up at the sacred waterfall. Completely overwhelmed by everything, she broke down and poured out her soul to the waterfall in a desperate attempt to change Brian back into a man… or at least a bear again.

Utterly worn out and exhausted she fell asleep at the waterfall. She woke early the next morning with a deep sense of guilt shrouding her completely. She slowly made her way back home. With each step closer to home she felt worse and worse. By the time she reached the door she was drenched in tears. She walked through the opened door to find the kitchen empty. She stood there confused asking herself how much worse things could possibly get. Not knowing what else to do she found herself wandering aimlessly in the woods again. As she looked around to gather her bearings she realized she knew the place but from where she didn’t know. And then it all rushed over her, she was standing in her magical garden. It was a bit grown over by now but just as beautiful as ever. She fell to her knees and began to weep… she looked up to notice someone staring back at her. It was Brian! They rushed to each other’s arms without a word needing to be said. They both knew exactly how the other felt and vowed to never let anything like that happen again.